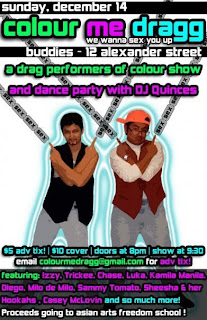 Colour Me Dragg entertained a massive crowd at Buddies in Bad Times Theatre on Sunday, December 14th. With thirteen exciting acts, Dainty Box MC-ing, and DJ Quinces at the decks, the third ever Milo de Milo and Sammy Tomato co-produced-CMD delivered a breathtaking show to an appreciative (and loud) audience!

CMD managed to sell a whopping 110 pre-tickets with Milo personally meeting up with those interested in purchasing them at street corners, and also with the help of Toronto Women's Bookstore. Even more people showed up at the door, making for a packed night in the Buddies theatre.

Milo and Sammy have plans for another CMD in 2009, and hope to match the success of the December '08 show!

Photos by Laurence Alex (click on images to enlarge)

Join our facebook group to receive updates on upcoming Colour Me Dragg shows!
Posted by Bring it! at 2:49 PM

Colour Me Dragg brings together drag, burlesque and other queer and trans performers of colour of all experience levels in the Toronto area in one exciting show.
Colour Me Dragg was started by Toronto drag king Milo de Milo in 2007, and has since brought together a production team consisting of Chase, Dainty Box, Tricia, and Sammy Samosa.

Are U a Performer??

Bring it!
Are you a person of colour who's always wanted to try drag, burlesque or other queer/trans performances out but just never felt like the right opportunity or space was made available to you? Well here's your chance to meet other performers of colour and learn the tricks of the trade to become a superstar! E-mail colour.me.dragg AT gmail DOT com to get started, or click here fill out the Form located at the bottom of this blog!

Send us an email at colour.me.dragg AT gmail DOT com to join our mailing list and receive updates about upcoming shows, events, performances, workshops and more! You can also communicate with other members of our community here!